From Wikipedia, the free encyclopedia
Bridget of Sweden (c. 1303 – 23 July 1373); born as Birgitta Birgersdotter, also Birgitta of Vadstena, or Saint Birgitta (Swedish: heliga Birgitta), was a mystic and saint, and founder of the Bridgettines nuns and monks after the death of her husband of twenty years. Outside of Sweden, she was also known as the Princess of Nericia[2] and was the mother of Catherine of Vadstena. (Though normally named as Bridget of Sweden, she was not a member of Swedish royalty.)

She is one of the six patron saints of Europe, together with Benedict of Nursia, Saints Cyril and Methodius, Catherine of Siena and Edith Stein.

The most celebrated saint of Sweden was the daughter of the knight Birger Persson[3] of the family of Finsta, governor and lawspeaker of Uppland, and one of the richest landowners of the country, and his wife Ingeborg Bengtsdotter, a member of the so-called Lawspeaker branch of the Folkunga family. Through her mother, Ingeborg, Birgitta was related to the Swedish kings of her era.

She was born in 1303. There is no exact recording for which precise date. In 1316, at the age of 14[3] she married Ulf Gudmarsson of the family of Ulvåsa, Lord of Närke, to whom she bore eight children, four daughters and four sons. Six survived infancy, which was rare at that time. Her eldest daughter was Märta Ulfsdotter. Her second daughter is now honored as St. Catherine of Sweden. Her youngest daughter was Cecilia Ulvsdotter. Bridget became known for her works of charity, particularly toward Östergötland’s unwed mothers and their children. When she was in her early thirties, she was summoned to be principal lady-in-waiting to the new Queen of Sweden, Blanche of Namur. In 1341, she and her husband went on pilgrimage to Santiago de Compostela.

In 1344, shortly after their return, Ulf died at the Cistercian Alvastra Abbey in Östergötland. After this loss, Birgitta became a member of the Third Order of St. Francis and devoted herself to a life of prayer and caring for the poor and the sick.[4]

It was about this time that she developed the idea of establishing the religious community which was to become the Order of the Most Holy Saviour, or the Brigittines, whose principal house at Vadstena was later richly endowed by King Magnus IV of Sweden and his queen. One distinctive feature of the houses of the Order was that they were double monasteries, with both men and women forming a joint community, though with separate cloisters. They were to live in poor convents and to give all surplus income to the poor. However, they were allowed to have as many books as they pleased.[4]

In 1350, a Jubilee Year, Bridget braved a plague-stricken Europe to make a pilgrimage to Rome accompanied by her daughter, Catherine, and a small party of priests and disciples. This was done partly to obtain from the Pope the authorization of the new Order and partly in pursuance of her self-imposed mission to elevate the moral tone of the age. This was during the period of the Avignon Papacy within the Roman Catholic Church, however, and she had to wait for the return of the papacy to Rome from the French city of Avignon, a move for which she agitated for many years.

It was not until 1370 that Pope Urban V, during his brief attempt to re-establish the papacy in Rome, confirmed the Rule of the Order, but meanwhile Birgitta had made herself universally beloved in Rome by her kindness and good works. Save for occasional pilgrimages, including one to Jerusalem in 1373, she remained in Rome until her death on 23 July 1373, urging ecclesiastical reform.[4]

In her pilgrimages to Rome, Jerusalem and Bethlehem, she sent “back precise instructions for the construction of the monastery” now known as Blue Church, insisting that an “abbess, signifying the Virgin Mary, should preside over both nuns and monks.”[5]

Bridget went to confession every day, and had a constant smiling, glowing face.[4] Although she never returned to Sweden, her years in Rome were far from happy, being hounded by debts and by opposition to her work against Church abuses. She was originally buried at San Lorenzo in Panisperna before her remains were returned to Sweden. She was canonized in the year 1391 by Pope Boniface IX, which was confirmed by the Council of Constance in 1415. Because of new discussions about her works, the Council of Basel confirmed the orthodoxy of the revelations in 1436. 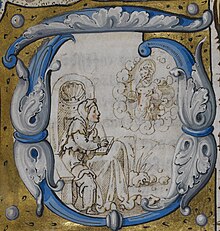 At the age of ten, Bridget had a vision of Jesus hanging upon the cross. When she asked who had treated him like this, he answered:[4]

They who despise me, and spurn my love for them.

She was so impressed that from that moment the Passion of Christ became the center of her spiritual life.[4] The revelations she had received since childhood now became more frequent, and her records of these Revelationes coelestes (“Celestial revelations”) which were translated into Latin by Matthias, canon of Linköping, and by her confessor, Peter Olafsson, prior of Alvastra, obtained a great vogue during the Middle Ages.[3] These revelations made Bridget something of a celebrity to some and a controversial figure to others.[6]

Her visions of the Nativity of Jesus had a great influence on depictions of the Nativity of Jesus in art. Shortly before her death, she described a vision which included the infant Jesus as lying on the ground, and emitting light himself, and describes the Virgin as blond-haired; many depictions followed this and reduced other light sources in the scene to emphasize this effect, and the Nativity remained very commonly treated with chiaroscuro through to the Baroque. Other details often seen such as a single candle “attached to the wall,” and the presence of God the Father above, also come from Bridget’s vision.

The Virgin kneels to pray to her child, to be joined by Saint Joseph, and this (technically known as the “Adoration of the Child”) becomes one of the most common depictions in the fifteenth century, largely replacing the reclining Virgin in the West. Versions of this depiction occur as early as 1300, well, before Bridget’s vision, and have a Franciscan origin, by which she may have been influenced, as she was a member of the Franciscan Order.[7] Her visions of Purgatory were also well known.[8]

In addition, “she even predicted an eventual Vatican State, foretelling almost the exact boundaries delineated by Mussolini for Vatican City in 1921.”[9]

Pope Benedict XVI spoke of Bridget in a general audience on 27 October 2010, saying that the value of Saint Bridget’s Revelations, sometimes the object of doubt, was specified by Pope John Paul II in the letter Spes Aedificandi: “Yet there is no doubt that the Church,” wrote my beloved predecessor, “which recognized Bridget’s holiness without ever pronouncing on her individual revelations, has accepted the overall authenticity of her interior experience.”[10]

Saint Bridget’s reliquary, holding a piece of her bone.

Saint Bridget prayed for a long time to know how many blows Jesus Christ suffered during His terrible Passion. Rewarding her patience, one day He appeared to her and said, “I received 5480 blows upon My Body. If you wish to honor them in some way, recite fifteen Our Fathers and fifteen Hail Marys with the following Prayers, which I Myself shall teach you, for an entire year. When the year is finished, you will have honored each of My Wounds.”[11]

The prayers became known as the “Fifteen O’s” because in the original Latin, each prayer began with the words O Jesu, O Rex, or O Domine Jesu Christe.[12] Some have questioned whether Saint Bridget is in fact their author; Eamon Duffy reports that the prayers probably originated in England, in the devotional circles that surrounded Richard Rolle or the English Brigittines.[13]

MASS TIMES
Mass on Monday at 9am and
6.30pm.
Mass Tuesday to Saturday at
9am only
Mass on Sunday at 9am,
11am, 1pm & 5pm. Please
follow the requests of ushers
at all Masses.
CONFESSIONS:
Saturday
10.30am - 11.30am
4.30pm - 5.30pm
ANOINTING OF THE SICK:
(for those who are unwell,
those, preparing for surgery or
those in danger of dying)
Contact Fr. Padraig or the parish
office to make arrangements.
BAPTISMS:
Celebrated Sa turd a ys b y
arrangement Book in person at
the Parish office giving three
weeks notice.
Eucharistic Adoration:
Daily after 9am Mass in the
Church.
Divine Mercy:
Wednesdays from 2.45 p.m. to
3.45 p.m.
Miraculous Medal Novena
is prayed at all Masses on
Monday.
Holy Hour follows Monday
evening Mass.
Devotion to the Holy Face
in the Adoration Chapel every
Thursday 7-8 p.m.
Saint Vincent de Paul:
086 063 787

Liturgy of the Day

Daily Mass readings and reflections by the Irish Catholic Bishop's Conference Liturgy of the Day
Copyright © 2020 Our Lady of Victories.
This site uses cookies: Find out more.